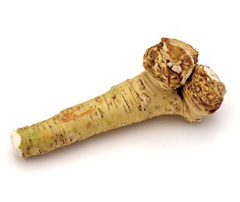 Armoracia rusticana
Brassicaceae with a tomosheris gene, perennial plant with origin in Europe. It is called horseradish or raifort, also called mountain wasabi in Hokkaido. It was introduced to Japan in the early years of the Meiji period. In western food, it is used for sauces and garnishing roast beef and so on. It has a pungency about 1.5 times that of wasabi, and it is also used as an ingredient in processed wasabi for "powder wasabi" and "tube type" products.

It is said to have been used in Greece during the pre-Christ era, and was used as a spice in the Roman Empire around the first century. Then, it was used as a source for fish and meat dishes in Germany around the 13th century, then it spread rapidly to the UK afterwards.

Horseradish does not produce many seeds and grows from the roots. The planting time in Hokkaido, the main production area of Japan, is around May and the harvest time is from October to November. Hokkaido is suitable for cultivation since Hokkaido is similar to the climate of Europe, the origin of horseradish.